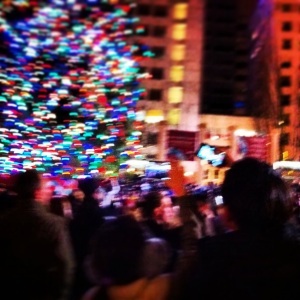 I guess I could have stayed home last year/night and welcomed the New Year in solitude and contemplation; but that probably wouldn’t have been what happened.

I would have either A. fallen asleep before midnight because I worked nine hours at the USPS or B. watched the New Year’s Eve celebrations on TV and lamented my singleness. You know, because television and movies tell us something magical should happen on New Year’s Eve.

Instead I contacted my friend Jessica, we put on cute festive dresses and we went out; first to dinner at Zeus Cafe where my friend Lori was serving for the evening and then to the Boiler Room for Karaoke. And that’s when it got weird. Not the normal partying with Teletubbies, Care Bears, Elvis Impersonators and Nearly Nudes Portland weird, (which I’ve done and can totally handle) but frat party karaoke weird.

I’ve done a decent bit of karaoke in this town and never encountered a crowd such as this. I’ve also never been hit on with such frequent ferociousness, either.

It started with Polish Matt whose actual name is much more European, as he said…repeatedly.  It ended two hours and six dudes later with Jordan who insisted he wasn’t hitting on us just before he and Jess got into a conversation about Jesus. Well, Jordan wanted to talk about sex. We did not.

Towards the end of the conversation he asked what else he needed to know. Jess said she didn’t know if it was strange to talk about this in a bar and then Jordan tried to launch into monologue on the weird sexual positions he prefers. In a successful attempt to redirect the conversation, I asked him what part of town he lived in.

What I wish I would have said was that what he needed to know, in addition to Jesus being a real person who once lived, as Jordan said, is that, “As crazy as it sounds, Jesus is a being with whom Jess and I both have real relationships. We believe that Jesus knows us, loves us, and gives us peace. You called us wildcards, because you couldn’t tell what we were about; what we were after. You were right, Jordan.  Unlike many people we observe in this bar tonight, we aren’t desperately trying to fill our lives with people or things that we hope will provide us with significance.

“Jordan you talked about not being able to really connect with anyone ever and that even though you came here with a group of friends, you don’t really know them and that’s why you’re chatting up two wildcards on the wall who have been observing it all. That has to be lonely. I hope that in 2014 you find peace, you find trust, and you find love…in Jesus…as crazy as it seems.”

But I didn’t and soon Jordan walked away and I told Jess that even though I had cooked up this plan, I REALLY didn’t want to ring in the New Year in this place and I’d rather walk to Pioneer Square in the freezing cold and see if other strangers had randomly assembled there. We left during the frat party-est version of Afternoon Delight, walked past women hula-ing electric neon hoops in Old Town and arrived with thousands of others at the square at 11:45 pm.

There was no program, no plan, no official countdown; we were all just drawn to the square, to the tree, to connection. At five minutes ‘til, a roar rose in the crowd. There I stood, with a good friend, in a crowd of strangers joyfully anticipating the future, shouting with glee over the possibilities. It was a good place to be; sorta magical, really.

They say what you’re doing at midnight is what you’ll do all year. This year, I can really get behind that.