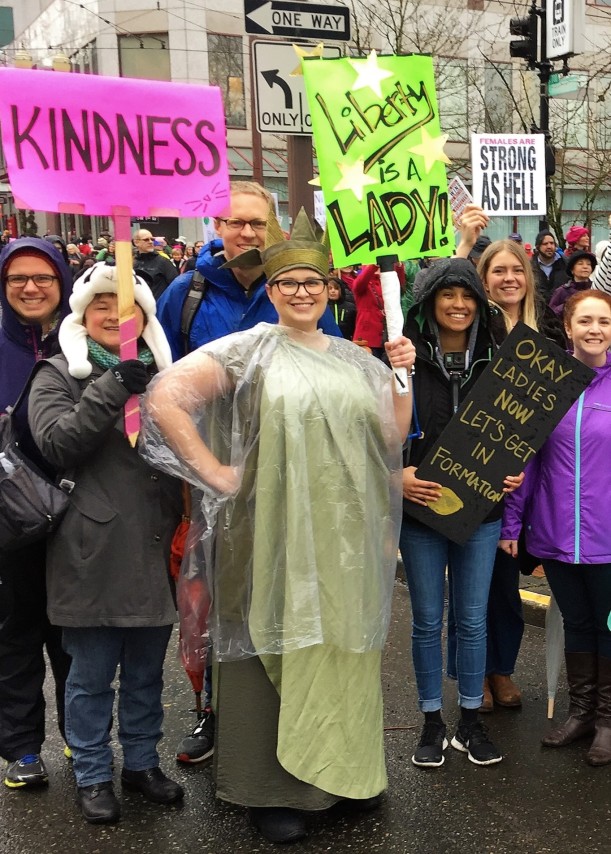 Even though Dressember^ ended last month, yesterday I donned a special dress, Lady Liberty’s, and marched for the 20 to 30 million people, mostly women, who are today enslaved. January is National Slavery and Human Trafficking Prevention Month and I was honored to march for women across the globe who were not free or able. I marched for women who are sold for $90. I’ve bought pairs of shoes for that price. I am sure many of you have, too. I marched for humans with no choice or voice. I marched because I love.

As a follower of Jesus, I am Jesus flippin’ tables outraged by Christian women and men who demeaned the march of me and my sisters.

I was crossing the Hawthorne Bridge, beginning a long walk along the Willamette River, when I passed an older man carrying an over-sized pack on his back and a large bible in the crook of his arm. I smiled and said, “Hello.” As he passed me he replied, “You’re beautiful.”  As the distance between us increased, I called out thank you. Then I began to cry.

It had been a VERY long time since anyone has said that to me. I hadn’t realized how much my heart needed to hear it.

This past December I wore a dress every day as a way to raise awareness and support to end human trafficking. To do this, I took pictures of myself in said dresses and posted them on social media. This activity, along with figuring out new ensembles, forced me to look at myself FAR MORE frequently than I was accustomed to and lead to an amount of emotional distress for which I was completely unprepared.

I did not believe I was beautiful. END_OF_DOCUMENT_TOKEN_TO_BE_REPLACED